John M: I have a problem with the blower motor in my 2009 Colorado. Similar to what you show for a 2008, but need more info. I have power all the way in the brown wire to the motor and it didn’t work. I removed the motor and bench tested with jumpers to a battery and motor works just fine? I am the second owner and it looks like this motor has been replaced once before I got it as there is not a gm part number on it anywhere. It appears that there may have been an issue with one wire in the connector behind the kick panel that someone has repaired. I have also cleaned up all electrical ground locations. The two wire connector to the motor… is the brown wire a hot one and is the orange colored one a ground? 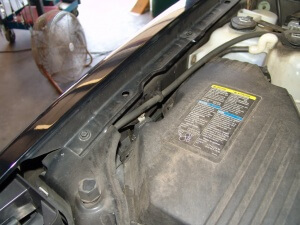 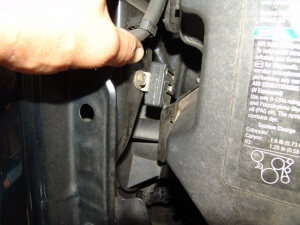 John M: The one behind the air cleaner I have relocated for easier access and mounted all the wires with ring terminals to a ground block that I added there. I have also noted the orange wire that is at the motor plug and at the harness plug heading back to the plug at the kick panel does not appear to be the same or…. is it maybe isn’t where it should be? It is the one I think has been tampered with….the plug at the kick panel, do you know what position that wire would be in the plug? The one that has been tampered would be thus…with the connector mounted to the kick panel, the wire that is closet to the rear and the row closet to the drivers side…is the one that has been tampered with on the kick panel connector. Is that the position the orange wire should be in there? Because that is where a funny looking very small silver not copper wire is. It is not solid but very few stands and wrapped in tape no insulation.

The “silver” wire may be  a factory shielding wire lead but I would need you to upload a picture of it so I could tell for sure.

Testing is much easier than disassembly and general inspection. Also if you start moving things around without testing the problem could temporarily go away and make repairing more difficult.

John M: When you refer to terminal B  at the HVAC control head… are you referring to behind the switches on the center portion of the dash? Should I remove them to check regardless? I’m this far into it now, might as well eliminate as many possibilities as I am capable of …

I am still unsure of where Terminal ‘B’ at the X2 location is. Do I need to remove the switch controls in the dash to see it?

John M: OK, so I am at the switch and there is a wire in the “B” slot in the plug into the switch…. is that the ground wire you refer to that comes from the inner fender behind the air cleaner? I get 12.6 volts testing the brown motor wire when I ground the test device to the vehicle. If I touch that wire in the B socket should I get 12.6 volts? Because right now I get nothing….if I ground to all four wires at the firewall by the air cleaner, I get 12.6 volts with each of them individually…could this then possibly mean the wire from here to the switch has been compromised and needs replaced?

Sorry typo…I mean 14.6…the ground wire to the switch is good . I unplugged it and probed the ground to check if it was okay… the brown wire at the motor read 14.6 again when hooked to the B slot in the plug…when I plug it in there is nothing coming into the other wires nor is there any sign or reading at the resistor…the harness wires leaving the switch going to the resistor…show nothing. Would this mean the switch is not working at all? It appears that it should be replaceable? Should I replace it to try that?

Sparky: If the black wire at terminal “B” shows a ground unplugged and or from the backside while plugged in, then it is very likely that there is a terminal mating problem for that terminal and it’s mating terminal at the blower switch.

John M: I found the problem…everything was good…except the plug in at the switch…the B POSITION WAS NOT GROUNDING THE SWITCH WHEN PLUGGED IN! I found this by wiggling the plug on the switch and it would suddenly work then stop. I then removed the plug and diligently with a fine pick…closed the gap on the B position connector so that it firmly gripped the prong on the plug. It is now working better than ever. I’m guessing that between this end of the ground wire and the end in the fender behind the air cleaner… both were a problem. Needless to say it’s solved! One last query… is it advisable to replace the resistor even though it appears fine… in the name of preventive maintenance and it happening at an inopportune time? Or is it truly if it ain’t broke don’t fix it issue?

Sparky: Glad you found the problem. Keep in mind that at some point you will want to replace the switch and the harness connector at the same time to insure it is completely repaired. Heat damage can rarely be overcome in the long term by limited cleaning and tightening.  As far as the blower resistor question goes my recommendation is to do a close visual inspection. If there is any sign of heat discoloration on any of the terminals or on the plastic around the terminals then they should be replaced. If everything looks like new I would leave it alone. If you have picks and skill you could consider tightening the spring tension of each individual terminal.

Want to Thank Sparky for the help you received from this site including Answers to your Questions? Show your support Now! Thanks Sparky!

Older Answers To Your Questions